A visual poem on borders and freedom.

Bonaventura Palazzo was built in 1927 by architect Giovanni Aiello[1889-1976]. It is located in one of the main streets of Giarre, a small comune on the slopes of Mount Etna, the tallest active volcano on the European continent. The building is a rare example of Sicilian Liberty; its mixture of Spanish eccentricity and Italian classicism makes it one of the most important town’s icons.

The dark red façade stands out among the placid buildings that surround the palazzo and creates a sort of theatrical background to the embroidery of balconies, mouldings, arches and columns that lay on a soft white Comiso stone. The symmetry of the façade is broken by a game of projections that pushes the rigid volume of the building forward, in tension, so as to interact with the urban environment and slowly become part of it. The floral ornament gives grace to the rigor of the mass and the two rose windows on the piano nobile, perfectly symmetrical with respect to the entry and main balcony, dampen the seriousness of the monochromatic structure. Similar to a pair of eyes striving for looking far away, the rosettes – made with local Caltagirone ceramics – are the only façade’s touch of colour. The distinctive crossing of blue and yellow petals that firmly bind to a thick cone-shaped centre, do not have the weakness of a simple décor, separate from the whole architectural composition, but rather help to shape the character of the artifact and its firm temperament.

Bonaventura palace has often been compared to Battlò House by Catalan architect Antoni Gaudì for the refinement of decorative motifs and complexity of shapes; the building’s geometric strictness maintains a Renaissance concinnity while using the compositional freedom of an early twentieth century Art Deco style. Rhythms are regularly repeated but the movement of volumes and light establishes an unexpected relationship between a rethought tradition and the modern spirit of the building. If walking along Kallipoli Street someone asks Giarre’s citizens about Bonaventura palazzo, after an initial hesitation they will probably respond by calling the building ‘the upside-down fruit bowl’, following the strong similarity of the two ceramic medallions on the top of the first floor with the shape of a traditional Sicilian fruit container. Whether the comparison is relevant or not does not matter, the detail is what everybody remembers.

‘ Whatever the air spaces, areas and dimensions involved, it is the precise study and good execution of details which confirm architectural greatness. 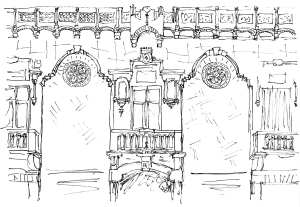