Raju Village (Fondachelli Fantina, Sicily) was hit by a disastrous flood in 1972 during which 4 people died. The village has been left empty since then.

In the years 1884-86 Georges-Pierre Seurat painted two similar images. One depicts a group of bathers at Asnières  (a commune in the suburbs of Paris along the river Seine), the other the Sunday pastime of a group of people on the Ile de la Jatte. 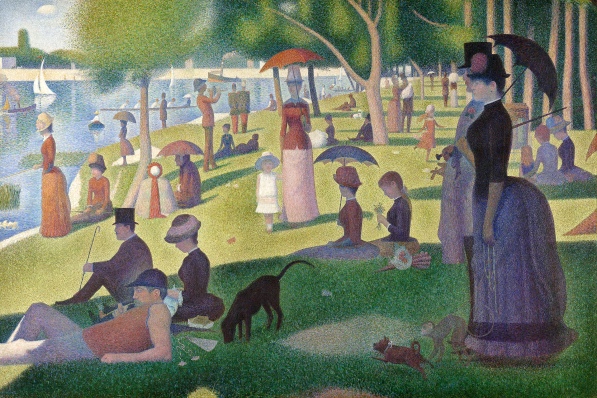 Georges-Pierre Seurat, ‘A Sunday Afternoon on the Island of La Grande Jatte’, 1884/86

Probably the historical era of which I am talking about will cast doubt on the relevance of the paintings with the current London housing condition. I cannot ensure the success of this written experiment but I believe a reflection on the subject is necessary.

Going back to the protagonists of the paintings is worth noting the author’s point of view. Seurat closely observes the few figures of the bathers and widens instead his eye when it comes to representing the Sunday activities carried out by a group of people on a park along the Seine. It has not yet been said that Seurat’s characters stand on the banks of the same river but on opposite sides. One wonders who those characters are and what kind of relationship does exist between them, and above all between them and us.

I will pause for a moment to better analyse the bathers: they have no clothes on – or at least a few – they are naked and almost with no face, sometimes their somatic traits are covered by hair other times by hats so that figures have a vague aspect, just drafted, general. They experience the river, they touch it with their body, they are not cut off from a context, the city in the background builds a reality of relations in which these figures exist. The factory is what Seurat uses to identify the bathers and to make their social status clear. Are the bathers mournful, contented, insouciant figures? And what is the relationship between them: are they alone, in pairs, are they children, parents, friends, colleagues?

A similar use of the image as social class representation will be employed many years later by Mario Monicelli in his ‘Romanzo popolare’ ( ‘Come home and meet my wife’, 1974). In one of the film scenes the two protagonists – a working class couple – are observed from the back, that is to say with no face, and socially identified with the image of a factory. 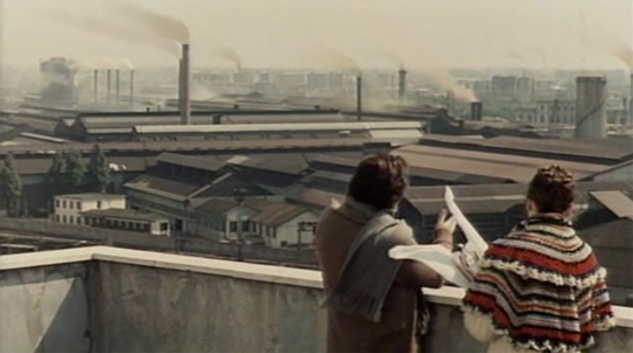 Today we are continuously talking about London and global housing crisis but maybe it would be more appropriate to ask whether such a crisis is really tied to the house itself, or if perhaps it does not involve that abstract architecture that we call society. It is important at this point to remember that the word ‘crisis’ comes from the Greek κρίσις ( krisis ) understood as decision, choice.

On the opposite side of the Seine there is a park, almost the same park on which the bathers of Asnières are smoothly lying. The picture becomes visibly idyllic, the title might turn into ‘a Sunday afternoon spent watching the river’ – it should be noted the passivity of the act of watching. Who are the main movers of the Ile de la Jatte? They have clothes, faces, umbrellas to prevent sunburn, they have relationships, children, husbands, wives, friends, they have food and pets. (Possessions?)

Where is the city on this side of the river? We cannot see it as it has been covered by trees. Thus, tiny groups made up of 2-3 figures each, healthy carriers of universal concepts such as family, marriage, elegance, and Beauty as opposed to the uncertainty of the blurred and anti-graceful relationship between the bathers, seem to float in an unreal world where the group virtuality is built of many small nucleuses separate from each other but united by the same social image, an image detached from any direct relationship with the city, the world and life itself.

‘Separate as we are, we are together’ Stéphane Mallarmé wrote in a poem titled ‘The White Water Lily’ describing his need to imagine his beloved, thus preferring an image to reality, a non-life to life.

A river flows between the two painting: does it unite them, separate them? One may question if Seurat’s eye belongs to the bathers’ side or perhaps to the Sundays strollers, maybe his greater knowledge of the latter allowed him to paint them in clear lines deadening instead the opposite figures. What images would we face if it were the bather staring at the river to portray the two banks?

The housing crisis in London is bound to our inert observation of two late 19th century paintings that do not hold any difference with today’s reality. Still two images: separate as we are, we are together (?).